What’s the Plan for Departure?

The Coconut Milk Run – The “Long” Way ‘Round.

There seems to be a lot of people that are perfectly happy in higher (or lower in the Southern Hemisphere) latitudes, but not me. I’d much prefer a warm climate, where a quick dip in the ocean would cool me off, but doesn’t cause me to freeze while I surf for an entire day without a wetsuit.

I’m allocating some four to five years for the trip as I expect to be on Island Time for a majority of it. 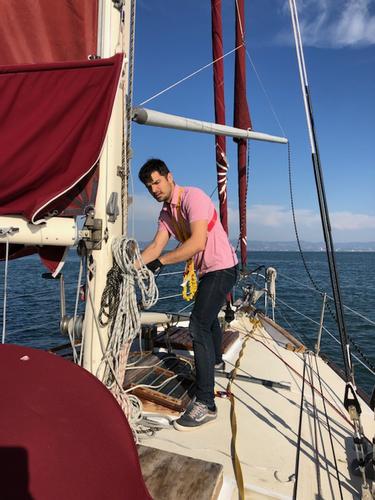 What Started All of This?

The Journey is the Destination.

There’s been something drawing me out West since before I can remember. I like to think it’s related to my namesake, Shane.

I had this idea to sail around the world in 2009 while sitting in my dorm room in Montgomery, Alabama during my second year in the United States Air Force. I didn’t even know what it meant when I wrote it down, but it felt like something that had to be done. It remained scribbled in some long-lost and forgotten notebook, never to be seen again.

Years later, around 2015, while I was finishing my Master’s of Science in Game Design in Florida, I was learning to code at a hackerspace in Longwood. During a late-night jam session, attempting to make an algorithmic music generation app, I was heading to Wawa with another hacker at the space. We got in his car to go get a sub and I asked where he lived – “New Smyrna Beach, on my boat.” That got my attention; it was the first time I had ever heard of someone even adjacent to that lifestyle.

Now that I knew it was achievable, the old idea came back into my head – “Sail Around the World.”

Does someone just buy a boat they see on the side of the road? What’s involved in the selection process? A lot, it turns out.

The most expensive way to get around the world for free.

There are day-sailors, racers, and cruisers. Each type of boat has an appropriate match in a sailor archetype. I’m certainly a cruiser, looking to get somewhere happy rather than as fast as possible.

There’s nothing more expensive than a cheap boat.

If your ship doesn’t come in, swim out and meet it.

But, appearances are a big chunk of it. The classic lines of the 36C (The “C” stands for “Cruising”) are rather aesthetically pleasing, but they’re just side-effects of time-tested features of a well-designed bluewater hull, with some tweaks to be more comfortable on a passage:

What Does Adventure Mean to You?

A ship in harbor is safe, but that’s not why ships were built.

So many people say they’re “always down for adventure.” A two-hour hike or rock climbing in a gym doesn’t count, despite what the vernacular seems to be trending towards. Without an element of risk, the notion is empty. Failure, while not an option, must still a possibility.

The Sages of O Dock

There’s wisdom all around. You’ve just gotta look for it and be ready to hear it when it comes. Usually it comes from the bearded men on the dock with a cart in-tow.

First it’s Christmas, then New Year’s, then Valentine’s Day, then you’re sixty-three years old like me, and you haven’t left the dock.

You’ll see when you get out there – Nobody else has any equipment or experience. You’re over-prepared.

The hardest part about sailing around the world is leaving the dock.

You look ready to go. Why are you here?

Sometimes you need to tether your boats to stop them from following your dreams.

The Golden Gate (to the rest of the Earth) will give me a departure to the West, followed by a left turn and downwind run towards Ventura.

According to pilot charts for March (and April lines up nicely in the same fashion), there are only likely two days of the month without any wind, with overwhelmingly-likely Force 4 to 5 winds from the North/Northwest and a following current of 0.7 knots. These sound like pretty ideal conditions for a first passage.

Who’s Going on the First Leg?

I decided there’s no harm in finding some experienced people looking for a trip down the coast.

After buying her own boat in New York, she made a trip down to Florida along the East Coast of the United States. She has since sailed in many races in the San Francisco Bay and cruised in the Canary Islands, Cuba, and Mexico.

Dustin has been a liveaboard sailor for nearly ten years in Florida. One day, he will embark on Project Freedom, heading to the Galapagos through the Panama Canal and the Caribbean thereafter. 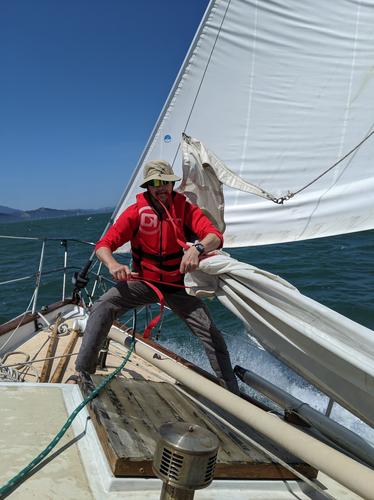 I have a big list of redundancies, but here are the significant things I may find useful for survival if things go real bad.

Will you be alone?

How Does it Feel?

I don’t feel good or bad about it. It’s just what’s going to happen. I have to do this trip and it’s not even my choice. There’s been some invisible force driving my actions to get to this point and it’s simply time for it to occur.

I have Internet and a remote job, at least at the time of writing.

Look into RSS readers and use the following link to be notified when new posts are made:

Use a free AIS-tracking service such as Vessel Finder, or just use this link to get my latest whereabouts:

Or, just bookmark my /which page to see where OutRun is in an embedded view.

Land was created to provide a place for boats to visit.

A captain who does not know where he wants to sail, there is no wind on Earth that will bring him there.

We’ll see how close to this “plan” I stick. There’s going to be places along the way that I end up wanting to go that don’t align with this plan. Maybe I won’t even enjoy any of this. Some people are concerned I’ll encounter coastal piracy and others are concerned about ocean storms, while still others try to discourage me from going certain places because of beaurocracy at the borders.

No matter what happens or when it does, this is what I must do. It’s my trip, not yours, so let me do my thing!

Previous: Replacing Chainplates | Next: What Happened On the First Trip?